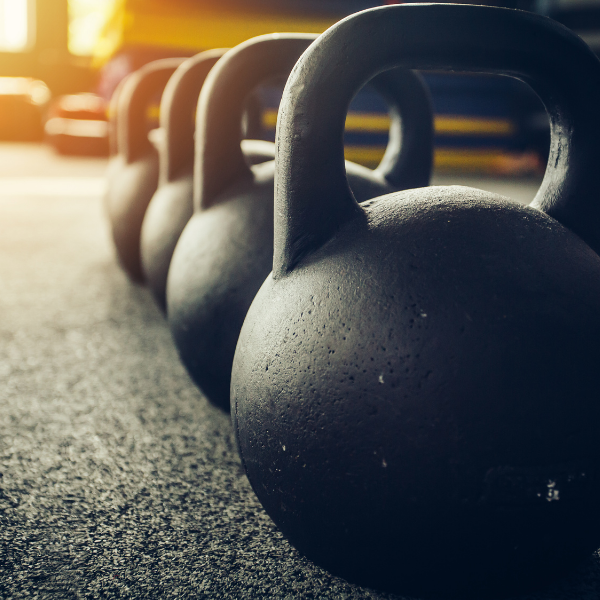 Unlike traditional dumbbells, the kettlebell’s center of mass is extended beyond the hand. This allows for more ballistic and swinging movements. The unique shape of the kettlebell provides the “unstable force” for handling – key for the effectiveness of the kettlebell exercises. Kettlebells have increased in popularity since early 2000’s and doesn’t seem to be fading like most fitness trends. Why? Well because it’s actually a darn good workout!

Kettlebells were developed in Russia in the 1700s, primarily for weighing crops. It is said that these farmers became stronger and found them useful for showing off their strength during festivals. The Soviet army used them as part of their physical training and conditioning programs in the 20th century. They had been used for competition and sports throughout Russia and Europe since the early 1900’s. Though kettlebells had been in the United States in some form since the 1960s or earlier, Dragon Door Publications developed the first instructor certification program in the USA in 2001.

How does it work?

By their nature, typical kettlebell exercises build strength and endurance, particularly in the lower back, legs, and shoulders, and increase grip strength. The basic movements, such as the swing, snatch, and the clean and jerk, engage the entire body at once, and in a way that mimics real world activities such as shoveling or farm work.

In English: it offsets your center of gravity, so your body works harder to maintain its balance!

Why is it so good?

Unlike the exercises with dumbbells or barbells, kettlebell exercises often involve large numbers of repetitions. Kettlebell exercises are in their nature holistic; therefore they work several muscles simultaneously and may be repeated continuously for several minutes or with short breaks. This combination makes the exercise partially aerobic and more similar to high-intensity interval training rather than to traditional weight lifting. Because of their high repetitions, kettlebell progression should start out slowly to build muscle endurance, support the joints and prevent injury.

Great to better your muscle tone, cardio, core strength, balance, burn fat and best of all it has varying weight categories from light to heavy, so if you feel you need a more intense workout just use a heavier weight!

Don’t hurt yourself though; be aware of your body’s limits and up the intensity gradually.

Leave a comment and let us know whether you have tried kettlebell training and how it worked for you.

We use cookies on our website to give you the most relevant experience by remembering your preferences and repeat visits. By clicking ACCEPT or continuing to browse the site you are agreeing to our use of cookies.

This website uses cookies to improve your experience while you navigate through the website. Out of these, the cookies that are categorized as necessary are stored on your browser as they are essential for the working of basic functionalities of the website. We also use third-party cookies that help us analyze and understand how you use this website. These cookies will be stored in your browser only with your consent. You also have the option to opt-out of these cookies. But opting out of some of these cookies may affect your browsing experience.
Necessary Always Enabled
Necessary cookies are absolutely essential for the website to function properly. These cookies ensure basic functionalities and security features of the website, anonymously.
Functional
Functional cookies help to perform certain functionalities like sharing the content of the website on social media platforms, collect feedbacks, and other third-party features.
Performance
Performance cookies are used to understand and analyze the key performance indexes of the website which helps in delivering a better user experience for the visitors.
Analytics
Analytical cookies are used to understand how visitors interact with the website. These cookies help provide information on metrics the number of visitors, bounce rate, traffic source, etc.
Advertisement
Advertisement cookies are used to provide visitors with relevant ads and marketing campaigns. These cookies track visitors across websites and collect information to provide customized ads.
Others
Other uncategorized cookies are those that are being analyzed and have not been classified into a category as yet.
SAVE & ACCEPT
Book a Virtual Showroom Tour
0
0
Your Cart
Your cart is emptyReturn to Shop
Continue Shopping